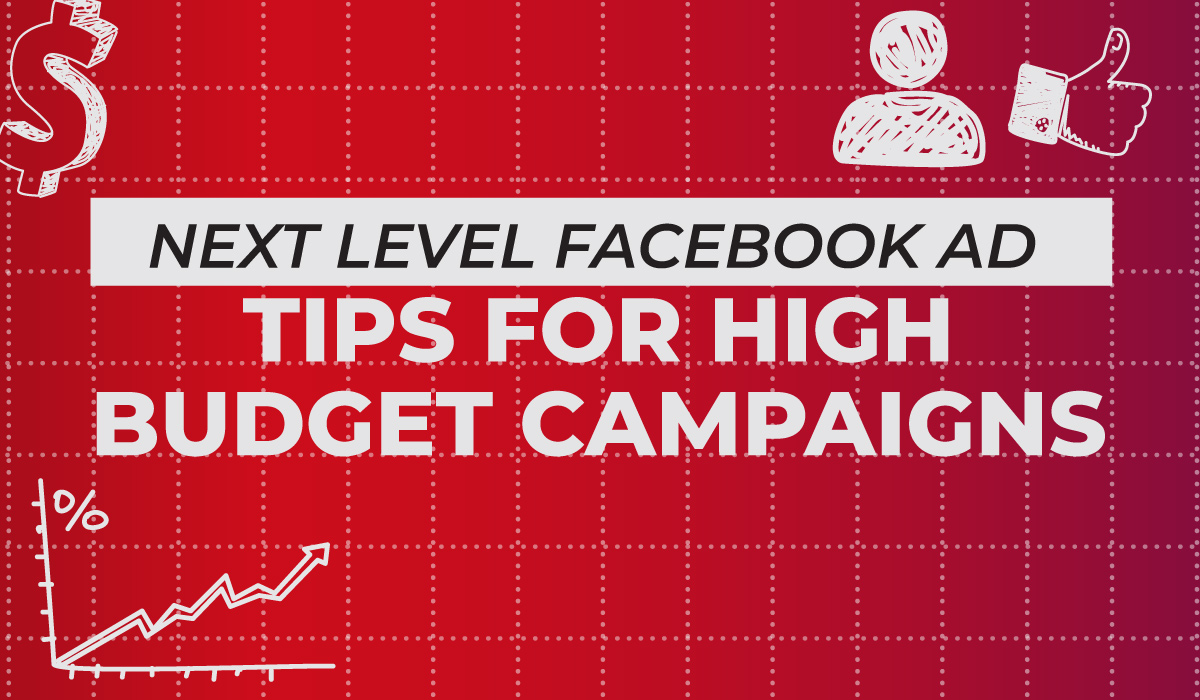 Social media ads of all kinds are undeniably one of the most potent ways to reach your desired audience. With social algorithms’ constantly improving abilities to identify target audiences and serve ads to niche interests, it is an effective way to expose your brand to those who want to hear about it.

BUT WHICH SOCIAL MEDIA PLATFORM SHOULD YOU CHOOSE TO ADVERTISE ON?

Of course, an ideal campaign would include cross channel marketing (more about this later), but let’s take a deep dive into the need for Facebook ads, especially when you have a high budget.

You already know that social media algorithms are masters of targeting. But the skills of Facebook’s algorithm can’t be praised enough. While other social media are still working through how to structure an advertising algorithm, it is much more effective than any human could achieve trying to target. Also, Facebook targets based off of a variety of data that they collect from their users including locations, joined groups, demographics, and interests, which provides a far more holistic view of your target market than non-algorithm market analysis.

Most marketers want to sit back after they’ve completed creative for their social media ad campaign. I mean, once you’ve made the ad, that’s it, right? Wrong!

The problem with this mentality is that it doesn’t allow you to reflect on your campaign and make improvements throughout its duration. Do you want to know about online click throughs and track impacts? Facebook tracks this for you so all you have to do is look at the report. But what’s more, is that Facebook has begun to use Square (the digital payment company) to track offline engagements with your company as well. If you have your Facebook linked to your Square, you can track how offline and online engagement is increasing around your ad campaign. This tracking service is relatively unrivaled amongst other social media ad sites, which sets Facebook above the rest for a high budget, investment campaign. Let’s dive into these facebook ad tips! WHAT IS THE AVERAGE CAMPAIGN STRUCTURE?

If you’re asking this question, it might be reasonable for you to take a look at starting with a smaller budget on Facebook to ensure that the audience you’re looking for is going to be receptive on the site. But regardless, let’s examine a typical campaign structure for a Facebook ad. For audiences, there is only one part of a campaign that they see. Obviously, it’s the actual ads. But as an advertiser, you’ll see three levels: Campaigns, Ad Sets, and the Ads. Think of these like a pyramid with the Campaigns at the bottom and Ads at the top. Your campaigns are the basis of your ad sets which are the basis for your ads. But let’s break these down.

Campaigns define what type of ad you’re running. Whether it’s for video views, awareness, or increased mailing list goals, your campaign will define your ultimate goals for the ad and will align with one of Facebook’s ad types.

Then come your ad sets. These are the general settings of your ads, like budget, who sees your ad, where your ad will appear on Facebook (sidebar ads, search ads etc), and schedule (want to run your campaign for 24 hours or 3 years? Take it up with your Ad set).

Last, but certainly not least come your actual ads, but you already know what that means. When advertising on Facebook, this is the level you have the most control over, so be sure to develop creative copy which will win over your audience. SO YOU WANT TO RUN WITH THE BIG DOGS?

Facebook has kept this info partially under wraps, but they’ve recently increased their transparency about ad spending, so here’s what we know. Facebook determines costs of ad based on timing (i.e. The supply and demand… Are there lots of people wanting to run on Facebook ad space or not? Expect more expensive ad placements during ad-heavy seasons), ad quality, target audience, and ad placement (where on the site will it be seen).

HOW DOES FACEBOOK DETERMINE THE COST OF AN AD?

Now that we’ve gone over the very basics of Facebook ad campaigning, let’s get into the ins and outs of scaling your campaigns. Keep in mind, scaling will look different for everybody based on earnings, revenue, and company size, so don’t worry too much about whether your campaign is considered “high budget” or not. Regardless of your budget, these principles can be applied to your campaign, they just might have to be scaled.

If you want to begin working with a higher budget on Facebook, or if you’ve already started to go higher, slow down! It’s exciting to be able to invest more in advertising, but ensure that you increase your budget 10-20% at a time to really maximize on your budgeting. If you increase your budget rapidly, you might miss a lower (and more optimal) budget that works for your audience. More money doesn’t always mean better, so increase slowly to see the biggest ROIs.

If you’ve already exhausted the ad potential of the top 1-2% of your existing audience, it might be time to expand your reach. Especially if you’ve already spent a considerable amount of our budget on that top few percentages, expanding the relevant interests on your ad campaign can be an easy fix to grow your advertising reach. This can be as simple as adding additional keywords to the audience interests portion of your ad sets. A word of caution when doing this though, don’t add so many interests that the ads are appearing en masse. Your audience is going to get fatigued, plus you won’t get many click throughs.

If it ain’t broke, don’t fix it

The most important part of managing a high budget campaign is making sure you maintain the bottom line audience that you had when you were working with a smaller budget. You might be adding relevant interests or expanding your audience in other ways (see below), but maintaining your bottom line is the most important portion of your audience. That 1-2% of users who are consistently or at least at one point, interacted with your ads heavily are a great way to maintain the growth you’ve achieved. Your budget needs to be equal parts expanding your high budget and maintaining what you’ve already achieved.

If it’s broke, fix it (don’t throw money at it)

High budget campaigns are expensive, but they shouldn’t be wasteful. In fact, they should be the exact opposite of wasteful. If you find that you’re not seeing results with a higher budget, avoid just throwing money at the problem. Increasing your budget cap on Facebook will most likely not solve your ad campaign issues. Instead, turn towards the settings on your Ad sets to ensure that you’re optimizing your reach. Look at timing, interests, and placement to really determine what the issue could be. If you are putting suitable work and creativity into your ad but not seeing results, chances are Facebook is struggling to find a suitable audience for the ad (hence the decreased click through rate or underperforming KPIs). Again, resist the “raise the budget” solution and look at what you can tinker with in your settings to clear things up.

The beauty of Facebook advertising is that it is truly user friendly, on both sides. As an advertiser, Facebook has streamlined the process of expanding to new audiences with the idea of the “lookalike audience”. These audiences are for the more high budget and advanced Facebook advertisers who’ve already created a name for themselves with an audience, but want to expand on their engagement with a similar, but new audience. Facebook defines your look alike audience as audiences which look like who typically interacts with your ads with a few changes. So how does it work? First, you choose a source audience and then Facebook will determine a look alike audience from this source audience. You might define a source audience as your top 10% who purchased from ads, customers who engaged with your Facebook page from an ad clickthrough, customers who visited your website from Facebook, or even your entire global customer base. You can create hundreds of lookalike audiences from a single source audience so this is a particularly valuable tool for expanding more with a high budget.

If you’ve read this far, you’re probably aware of how UX friendly the Facebook ad space is. This means you don’t have to do much with adding and removing ads based on your engagements once you’ve passed them over to Facebook. Facebook wants to create the best ad experience for its users which means that it will automatically shift your budget to the most profitable ad set. It might sound too good to be true, but Facebook will actually do this without you lifting a finger. Facebook is a much better algorithm that the human brain will ever be at determining where it should place your ad, and luckily, they’ll budget for you as well. This means that for your higher budget campaigns, you shouldn’t actually touch which ads you’ve included in your ad sets because Facebook will automatically invest into your most effective ads.

If Facebook is handling how to distribute your budget and you’ve made your ad sets with suitable ads, focus on the human side of things. Facebook is an algorithm, which the human mind can’t beat in terms of determining your budget, but you can beat Facebook at something, and that’s creative.

While Facebook does the heavy lifting everywhere else, you should concentrate on the creative parts of your campaign. On average, you’ll have just 2-3 seconds to make an impression on a potential customer, and that’s being generous. With so little time, and so much to say, your time will be best spent focusing on expanding your creative reach. For Facebook ads specifically, this should include ensuring that your ad looks great in all placements on the site. This means it needs to have all the creative elements for a mobile ad, sidebar ad, and any other area that Facebook can place ads.
Maximize your reach by maximizing your creative. Also, create multiple creative perspectives for an ad set. When you use the same creative across your ad set, your audience will likely suffer from ad fatigue. Avoid this by investing in varied creative elements across your ad sets. The best thing yet is that there are tons of already successful Facebook ad campaigns that you can look at. Take some of the elements that consistently work and put them towards your own campaigns!

If you have a high budget for Facebook ad campaigns, but you’re not seeing the return on investment you were expecting, it’s okay to look for other channels of advertising. It might be as easy as shifting your ad space from Facebook to Facebook-owned Instagram. This cross channel advertising doesn’t mean you have to completely leave Facebook behind, just decrease your budget there, and invest in other channels of advertising. Even if you’re seeing great returns on Facebook, consider taking your ads to Youtube, Twitter, or another social media platform to really increase your reach. Overall, the world of Facebook advertising can be a complicated one, but if you’ve got the right expertise and you do your research, it can be one of the most powerful channels of social media marketing. Make Facebook advertising work for you, and you’ll see major ROIs.

Find Us On Social!

The Power Of Community

The Lingering Effects of BNPL

Want to learn more about how to maximize your marketing efforts?